Two Days Before the Show

I still keep the little gift for Hayley. Maybe God has a better plan. Who knows?


I wrote it here a year ago when Hayley Westenra first came to Jakarta for the concert with Andrea Bocelli. Broken-hearted, for I couldn’t meet her in person. I thought it was the only chance I could see her, unless I had an infinite amount of money to travel to England or New Zealand to watch her concerts there. Indonesia – unlike Japan and Taiwan – is new for Hayley. I was afraid she wouldn’t come again. So when I lost this once in a lifetime opportunity, it didn’t feel good. It didn’t feel good at all. I was that close!


What I didn’t know is that one year later,  God would show me one of His best surprises. Universe always finds a way for those who want to live their dreams.

It began with a direct message from my twitter friend in early August, 2012. It was another ordinary sunny Sunday, but what he told me was not ordinary. He said that Hayley might come to Jakarta for the concert with David Foster on November. How could on earth I didn’t know about it? I searched on Google, then found out the promoter of the show. I couldn’t be happier when they confirmed that Hayley would be one of the performers. I had the second chance!

I bought the ticket in the very first day of selling. I downloaded a countdown application on my phone so I didn’t have to count how many days left to watch her concert. I designed my own t-shirt, I made a card and a simple comic as well. All is because I was too excited to watch the concert and to see Hayley again in Jakarta.

It was DVD Celtic Woman A New Journey that introduced me to Hayley Westenra. I bought it in 2010, not long after Songs from the Heart. She stole my attention since The Sky and the Dawn and the Sun, but I loved her in Scarborough Fair and Lascia Ch’io Pianga. I knew she was no longer the member of the girls, so I started looking for her own music.

Why Hayley? Well, why not? She is amazing. Her voice is unbelievable. You have to listen to her songs to know how beautiful her voice is. Watching her singing live – or even better, meeting her in person – would be like a dream comes true for me.

Learning from previous experience, I understood that it might not be easy to meet Hayley. After the show was my biggest chance, but MEIS – the venue – was totally new for me. I didn’t even know where the backstage is or where to wait. See, even in smaller venue like Ritz for last year concert, I didn’t meet Hayley. I prepared myself if I lost the opportunity again.

I had no idea that this one place I visited a lot near my house – not MEIS or any other places I ever thought – would witness the highlight of my life this year.

Hayley came to Jakarta on Tuesday, November 6th while the concert would be three days later. From those days, I just knew that Hayley would be in MEIS on Friday. The rest were mystery.

But hey, she came with David Foster! This upcoming concert in Jakarta would be the third for him. From the old articles I read, I learned that he would have a press conference one or two days before the show. In the previous concert, he did press conference in Kempinski Hotel. It’s not that far from my house. I could go and wait there if he didn’t change the place.

Wednesday evening, November 7th. I was on twitter when I found out from the promoter that David Foster was having press conference. From some random people on twitter, I knew they did it in Epicentrum Walk. It means Hayley was there, too! This place is so near from my house. I could walk there just for about 15 minutes. Problem is, the tweet was from an hour before. I was afraid that press conference was done. I still went there though, to make sure.

I almost gave up and went home when finally there was a tweet from the other people. He said he was in Ming Restaurant for David Foster Gala Dinner. Ming is still in Epicentrum Walk; lucky me. I went there and found out that the restaurant was closed by a big black curtain. There was a girl in a black dress to welcome the guests.

I waited  a few meters from Ming. It was very quiet. I was the only one there. I couldn’t hear a thing from outside. I was not sure if Hayley – or even David Foster – was there. I just got one tweet from this random person, and he could be wrong. I asked the girl about David Foster Gala Dinner, and she said she didn’t know anything about it. She just said that the restaurant was booked for a private party.

A man suddenly came out from the restaurant. When I asked him the same question, he said that Gala Dinner was for the committee. No David Foster there. Something told me he was lying.

It was 8 pm. I could wait for two or three hours for the uncertainty, or I could go home and watch TV. I chose the first option. I would wait. I bought a book to help me kill the time.

I’d continued my reading before I heard this very familiar voice. It was Hayley’s! I started to get nervous, I could feel chills on the back of my neck. I moved closer to the elevator near restaurant. She would use it, I swore. It was just about the time that she would finally come. I would meet her tonight!

Then I saw her. Hayley Westenra. It’s HAYLEY WESTENRA, you guys!! She was heading to elevator with some people – maybe the ones from the promoter. She looked adorable with her dress. She was prettier than I thought.

What happened next was better than what I expected.

She smiled. I smiled. I got closer to her. I asked her for her signature.

I didn’t think the people around us were happy. They kept standing still; one person was ready next to the elevator.

But Hayley... she made me feel comfortable even in such situation. She didn’t look like she was in hurry. She could just give me her autograph and leave me, right? But she asked me to spell my name instead. She would write it on my Paradiso cover before she signed it.

I said how wonderful her voice is. I thanked her for her music. I told her that I prepared the little gift for her but I didn’t bring it.

I should say much, but my brain didn’t allow me to. It was hard to say many things in English especially when I was too nervous. It was surreal for me.

“Could you take a picture with me?” I asked her.

She said yes. Problem is, I went there alone.

“Could somebody please help me?”

I finally asked this man in a black uniform. Yay! I got a picture – no, two pictures – with Hayley! I thanked him.

I thanked Hayley for her kindness. I couldn’t thank her enough.

“See you this Friday.”

We shook hands. I awkwardly left her. It seemed like I was the one in hurry. D'oh!

She went to elevator while I walked to the opposite way to reach for the escalator. Why didn’t I just use the same elevator like her?

I didn’t think that way at that time. I just knew that I was happy. I was very happy. I went home with a big smile. I couldn’t sleep for I still found it hard to believe my good luck.

Some random people on twitter didn’t know that they’ve helped a girl to reach her dream. Or maybe, it’s Universe that conspired. 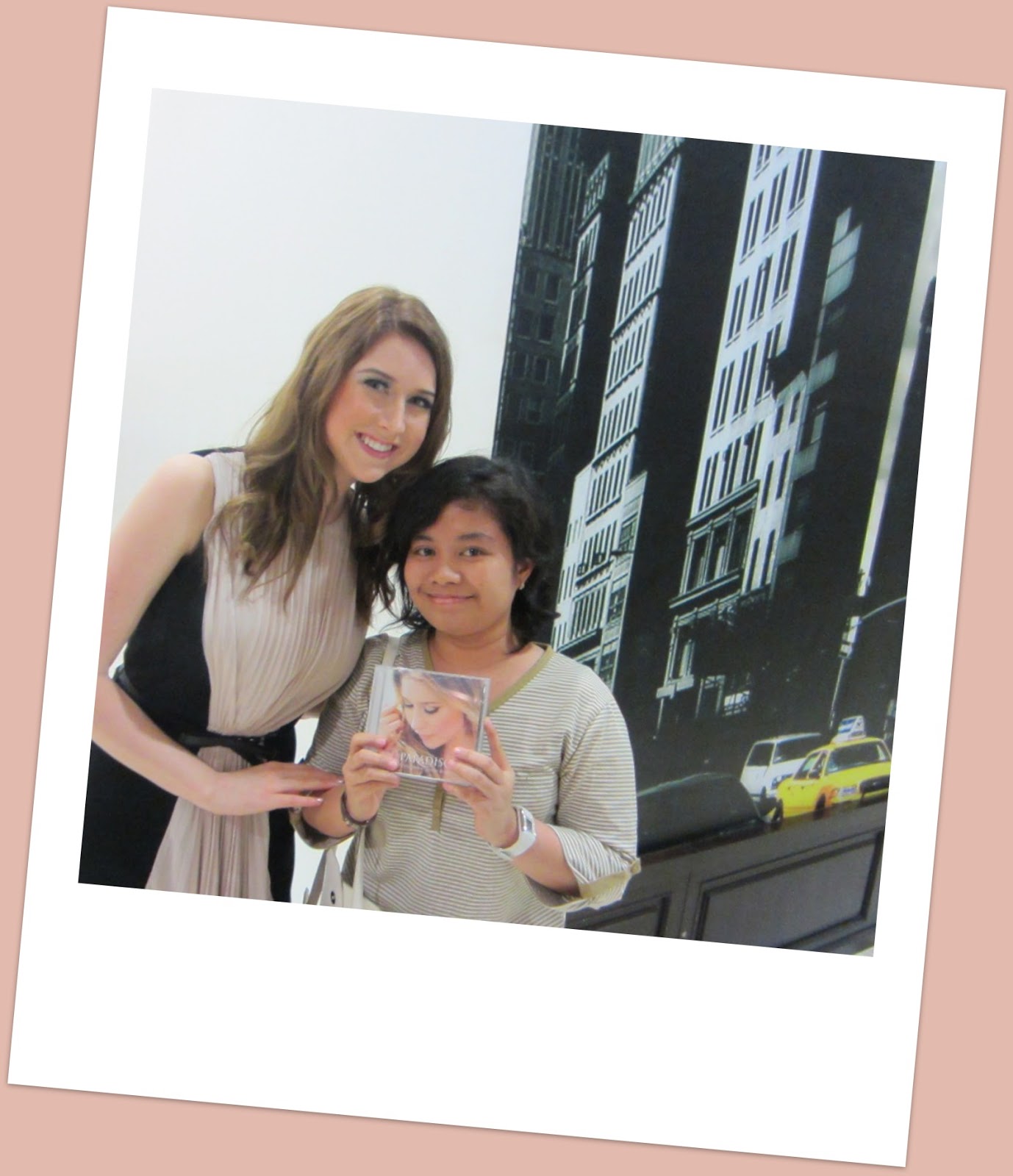 Email ThisBlogThis!Share to TwitterShare to FacebookShare to Pinterest
Labels: dreams